Go ye therefore, and teach all nations, baptizing them in the name of the Father, and of the Son, and of the Holy Ghost.... 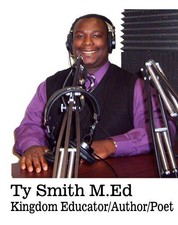 After a failed abortion attempt by his mother, Ty Smith was born and spared by the hand of God! When Ty was an infant, he almost died in the hospital after being diagnosed with Pertussis!!! The doctors told his mother that he would need a voice box, but God had a plan for his Life!!! Today Ty is a living, speaking testimony!! Despite the stereotypes of African American men Ty has overcome many obstacles. Ty who is the youngest of three, was supported by his hardworking mother who did not graduate from high school. His stepfather died when he was 7, his biological father died when he was 10 and his grandfather died when he was 16.... But by the Grace and Mercy of God, Ty has come a long way!!! He has a Master's Degree in Education from The University of Central Oklahoma, and he has also written a self-published book called “Kingdom Poetry”.

As a Kingdom Poet, Ty has opened up for many artists, and heavyweights including Pastor Shirley Caesar, and Martin Luther King III. He has been featured in several newspaper articles and has been a guest on Atlanta LIVE TV.  As a community activist and a mentor for Atlanta Cares Mentoring Movement, he speaks at libraries, churches, conferences, universities, detention centers, shelters, nursing homes, parks, and outdoor community events. His ministry “Ty Speaks Life” touches the heart and soul of many people nationally and internationally with his free podcast on iTunes(Ty Speaks Life). Ty donates his poems to youth centers, and sends inspirational messages to prisons.

Ty inspires the young and old to draw closer to God and fulfill their destiny through Jesus!!! His goal is to promote education amongst minorities and to spread the gospel all over the world, with the gifts and talents God has graced him with!!! Ty is Single and he resides in the Greater Atlanta, Georgia area.  Support Him on Facebook by liking his page "Ty Speaks Life" To God Be All the Glory!!!